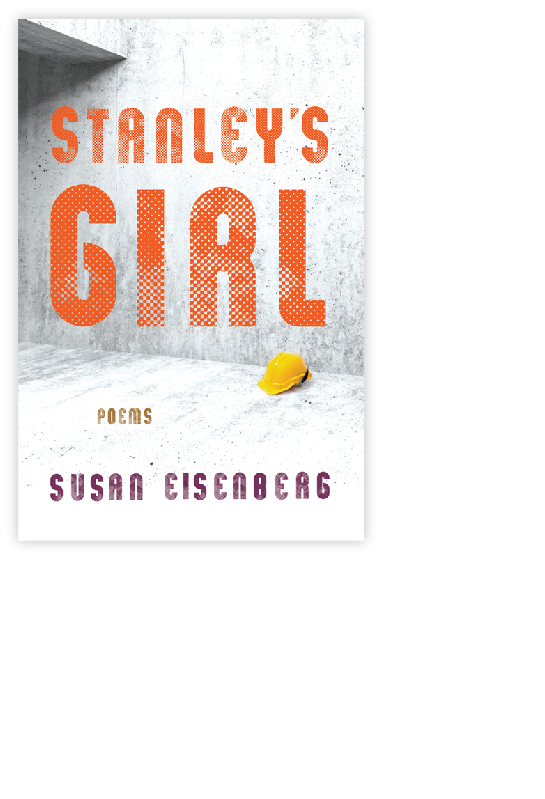 While her classmates cut in panels, bent pipe,
worked from blueprints, the black girl
ran for coffee, rustled stock, drilled
ceiling anchors by the mile, and swept
the shanty out; often worked alone. So,

when she was paired with a crackerjack
mechanic, a brother, and the foreman asked
how they’d like to disconnect
a transformer, high voltage, placing the cutters
in her palms, she leapt
like a racehorse out the starting gate.

The white boss walked them over to where the end
of cable lay in flaccid loop. Lifted it to show
the circle of fresh-cut copper, round
and wide-eyed as a shiny dollar coin: proof
power was dead. She was fired up.

But Omar, bless that man, had to teach.
They walked the length of the site
and back, retrieved his meter, as he explained
good practice: test equipment, take no one’s word.

The two looked down; saw wet mud
beneath their boots. Looked up:
white faces — like in a postcard
from a lynching — gathered
on the ledge above
to watch.

I can’t recall that journeyman’s name,
just his gentle, rutted face
and three bits of wisdom.

About working off staging:
Watch out you don’t take a Dixie.

About the huddle of tradesmen
who stopped work
to stare: Ignore them.

About villages in Korea entered
a quarter-century past, and so many nights since
in his dreams: You had to kill everyone.
Every one. Or kids, when they grew,
would avenge the deaths. Then —

the first girl in workboots and hardhat,
an apparition that called him to confession —

That’s why they draft
boys too young to think. 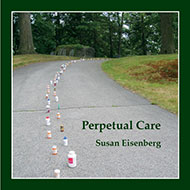 Who would dream to awaken from fevered sleep
stun-gunned into paralysis by their own
ruthless doppelganger:
power stations overtaken in a pre-dawn coup;
from every organ of the body
a triumphant, unfamiliar flag!

Who wouldn’t be humbled
by their double’s brazen brilliance?
Or, begin at once to plot in whispers
the first frantic steps of resistance?

Instead of my head —
floating dots.

My head not solid. Only an outline.
Inside: a swarm of separate dots
drifting.

Her eyes tell me I am off-grid.

Now the doc gives a try,
pulls out her phrase book of standards
in her trained tongue,
her face hopeful I’ll pick out a match.

We press our palms
against the same thick glass
but can’t make contact.

I shake my head. We move on. 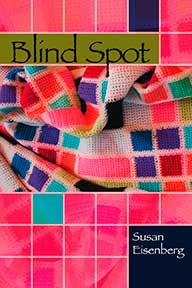 This year even the charoses tastes bitter,
salt water over everything. Enough

Keep the door open all night for Elijah.
He has been wandering
since seven tanks swallowed his house in Gaza.

My Grandmother Hated the Neighbors

Every Saturday morning, in 3-inch heels
and make-up, her dress hemmed
to the knees, she walked up the driveway
and–right in front of them–started up
her car, then drove to the beauty shop
where, beneath the hairdryer,
that chanting wouldn’t be heard.

Was it just to humiliate her
that they prayed outside
wearing long coats and velvet hats,
their sideburns curled like girls,
davening their mumbo jumbo
like it was the Middle Ages
and we lived in a filthy shtetl?

Or, just to shame us all
in front of the goyim
that they grew their beards
untamed—like they wanted
someone to yank at them? Pull them
down to their knees and her
—an American—with them. 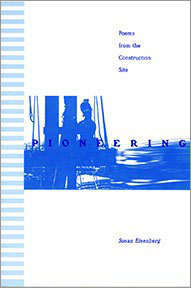 Pioneering:
Poems from the Construction Site

To the open possibility
of steel against sky
we weld, bolt and strap

serviced by windowless corridors
where ceilings hang low, as though
the ones who will push carts and carry trays
are unusually small or,
prefer to scurry like mice
in closed dark spaces

or, as though
extra headroom might give them
ideas.

Pioneering
for the tradeswomen of ’78

She had walked into their party uninvited
wedging a welcome mat in the doorway
for other women she hoped would
follow along soon.
The loud ones argued
to throw her out immediately. Even her supporters
found her audacity annoying. But once they saw
she mingled with everyone
drank American beer
kept conversations going during awkward silences

and was backed up by law
the controversy
calmed.

She surprised them.
She was reliable. She always gave her best.
She was invited back.
She became a regular
always on the fringe
expected to help out
just a little more.

When she stopped coming
they were confused. Why now? Hadn’t she
challenged custom? stared down rumors? ingratiated herself
years ago? so that now her presence was only
mildly discomforting. She never explained.

After all those years hurling back cannonballs
womanizing the barricades firing
only if she saw the whites of their eyes
it was the lonesomeness
of pioneering
that broke her resistance.

like the slow eating away of acid on metal:
the damage only visible over time. 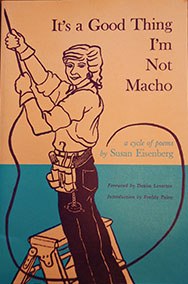 It's a Good Thing I'm Not Macho

Working three floors apart
two mechanics
at either end of a pipe
feed and pull in meter,
keeping time
through a morse code of yanks and tugs:
fingertips
against the vocal chords of wire.

Hanging In, Solo (So What’s It Like To Be the Only Female on the Job?)

On the sunshine rainbow days
womanhood
clothes me in a fuchsia velour jumpsuit
and crowns me with a diamond hardhat.
I flare my peacock feathers
and fly through the day’s work.

Trombones sizzle
as my drill glides through cement walls
through steel beams.
Bundles of pipe rise through the air
at the tilt
of my thumb.
Everything I do
is perfect.

The female of the species
advances 10 spaces and
takes an extra turn.

On the mudcold-gray-no-
sun-in-a-week days womanhood
weighs me down in colorless arctic fatigues
hands me an empty survival kit
and binds my head in an iron hardhat
three sizes too small.
I burrow myself mole-like into my work, but
my tampax leaks
my diamond-tip bit burns out after one hole
my offsets are backwards
all of my measurements are wrong.

At each mistake, a shrill siren
alerts all tradesmen on the job
to come laugh at me.
Everything I do
must be redone.

The female of the species
loses her next turn
and picks a penalty card.

On most days, those
partly sunny days that bridge
the rainbow sunshine days and the mudcold-
gray days
womanhood outfits me
in a flannel shirt and jeans
and hands me a hardhat just like
everyone else’s. I go about my work
like a giraffe foraging the high branches:
stretching myself comfortably.
As I hang lighting fixtures and make splices
I sing to myself and tell myself stories.
Everything I do
is competent enough.

The female of the species
advances 1 space
and awaits her next turn.